Mitchell Watnik and Richard A. Levine
University of California

Copyright © 2001 by Mitchell Watnik and Richard A. Levine, all rights reserved.
This text may be freely shared among individuals, but it may not be republished in any medium without express written consent from the authors and advance notification of the editor.

Our dataset is from the National Football League (NFL), but our work did not begin that way. We were interested in discussing the football team at our workplace, the University of California at Davis. The Aggies are an excellent football team, regularly win their league, and have been nationally ranked within NCAA Division II for a few years. In the 2000 season, the team made it to the semifinal game of the Division II championship series.

Just prior to that game, a local newspaper indicated that the Aggies' much-maligned defense was actually ranked in the top 20 in Division II. We did not believe that to be true. While we may be fair-weather fans of the Aggies, we felt that they were somewhat comparable to the 2000 version of the NFL St. Louis Rams -- all offense, no defense.

We decided to come up with a better way of ranking defenses, even going so far as to name the article before it was written ("The Best Defense is a Great Offense? Taking the Quarterback Out of Defense Rankings"). Our idea was that the amount of time that the defense is on the field is not typically accounted for in ranking defenses. A defense that is typically on the field for 25 minutes per 60-minute game is probably going to give up fewer points than a defense that is on the field for 30 minutes per game. Our first thought was to compute rates over time for touchdowns, yardage gained, and other accumulated statistics. A ranking of offenses could effectively use the same scoring technique as that for defenses (where a high score indicates a poor defense). We note that rates have been used previously for improving summary measures in sports statistics. For example, Anderson-Cook, Thornton, and Robles (1997) suggest a beautiful use of rates for evaluating power-play efficiency in hockey.

The first issue, of course, was to acquire data, but getting what we felt to be "necessary" information about Division II football teams is a formidable task. We therefore set out to rank NFL teams since the data are much more readily available.

The next problem is obvious: there is a lot of statistical information available for the taking. What is important and what is not important in ranking offenses and defenses is anyone's guess. Nonetheless, just as is the case with the title of this paper, a great deal of information can be effectively summarized using well-known dimension reduction techniques. We therefore employed the usual statistical methodology for when one has numerous variables, but a relatively small number of observations -- principal components (see Johnson and Wichern 1998 for an introduction). As noted in some detail in the sequel, the technique worked in almost textbook fashion.

Although we compiled this dataset, we have no doubt that ours will not be the final word on its analysis. Indeed, our hope is that students will come up with novel and statistically sound ways of summarizing and analyzing this NFL data.

We used SAS® "proc princomp" to perform the principal components analysis on the raw explanatory information, and, as will be seen, we tried various configurations of variables.

Our first attempt at the analysis involved only a few variables, because, at the time, these variables were the only ones available. Furthermore, we had information only for the American Football Conference (AFC; about half of the teams in the NFL). The first two principal components, given in Table 1 explain almost 82% of the variation. The corresponding biplot (see, for example, Section 12.7 of Johnson and Wichern 1998 or Venables and Ripley 1997, pp. 388-389) from S-Plus® is given in Figure 1, where the abbreviations for the variables used in the figure are given in Table 1 and those for the teams are given in Table 2; teams that made the playoffs are indicated by asterisks in the tables and figures. In order to avoid some confusion, we note that on Figure 1, there is a counterintuitive correspondence between the points and the graph labels. The lighter axes (those on the upper and right-hand parts of the plot) correspond to the darker points (the team names), and vice-versa (see Venables and Ripley 1997, p. 388). 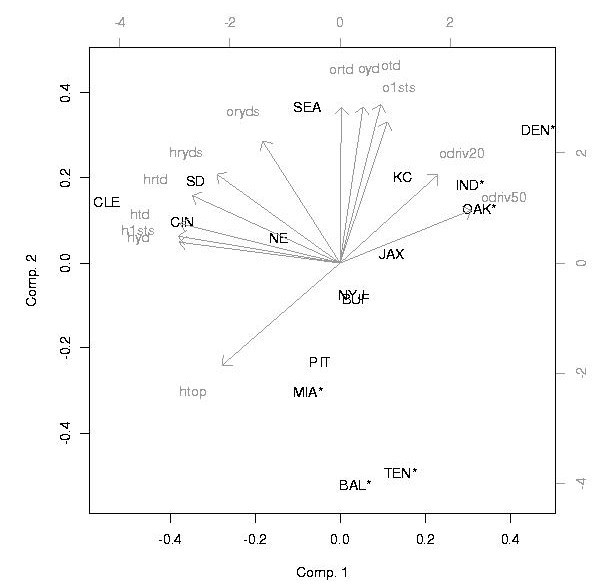 We interpret the first principal component as an "offensive score," summarizing a team's offensive capabilities. The second principal component may be interpreted as a "defensive score," summarizing a team's defensive capabilities. In the case of the first principal component, a large positive score indicates a good offensive team (indicated by being further to the right in Figure 1); in the second, a large negative score indicates a good defensive team (indicated by being closer to the bottom in Figure 1). We regressed these two principal components on team win percentage; the marginal regressions are depicted in Figures 2a and 2b. The R2 was 83%. We also found that the regression coefficients were close to equal, though of opposite signs. In fact, a hypothesis test -- see, for example, Samaniego and Watnik (1997) -- established that the difference between the two principal components, labeled "overall score" in Table 2 and Figure 2c, showed no significant difference between the model with just the overall score and the two separate scores. 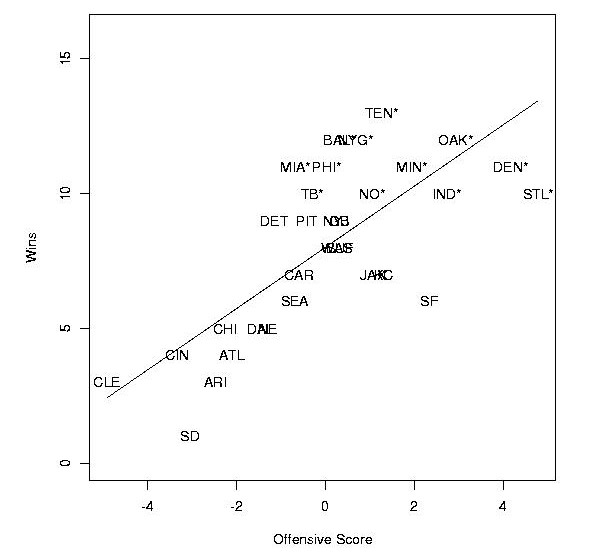 Figure 2a. Plot of Offensive Scores Against Wins. 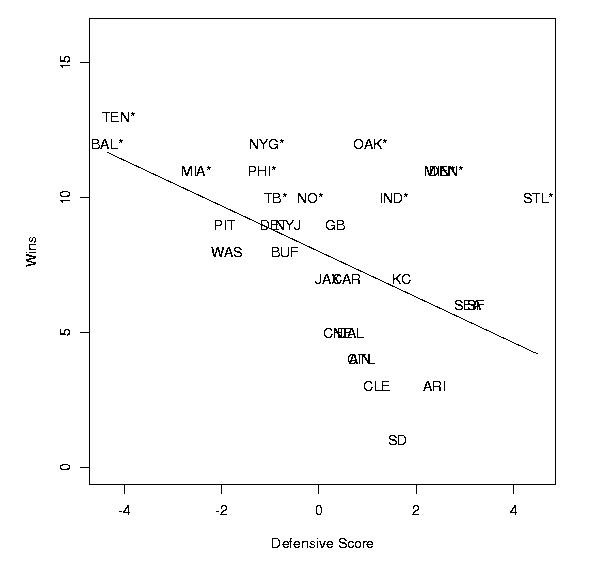 Figure 2b. Plot of Defensive Scores Against Wins. 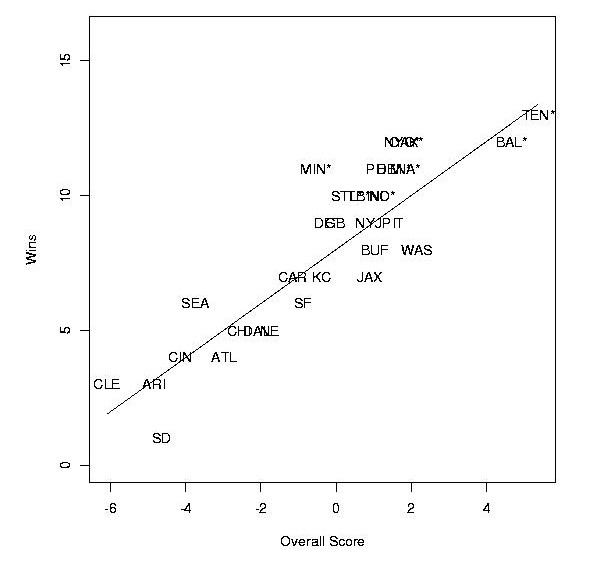 Table 2 presents the offensive, defensive, and overall scores (as defined in the previous paragraph), using the first two principal components of Table 1, for every NFL team. The National Football Conference (NFC) teams in Table 2 provide a kind of "validation" of the AFC model. Six of the top seven AFC teams, according to this scoring criterion, made the playoffs. While the best NFC team according to this measure, the Washington Redskins, did not make the playoffs, the next five NFC teams did. (This could be taken as an indication that the team's win-loss record was not up to the teams' performance and thus an explanation for the Redskins' late-season firing of their coach.) As the reader might notice throughout, the Minnesota Vikings fared poorly in almost every model while the Washington Redskins tended to be overrated by the models. Interestingly, though not surprisingly, the St. Louis Rams had the NFL's best offense and the worst defense according to our model. Three playoff-qualifying AFC teams, the Oakland Raiders, Denver Broncos, and Indianapolis Colts, had a similar, but not as dramatic, imbalance.

We were also fortunate to have the principal components come out in such a desirable (for us) way. As the reader will see shortly, when all (or most) of the variables are included in the analysis, the principal components method tends to look directly at the difference between the "home" and "opp" measures. This leads us to believe that the imbalance in the variables in this model is what caused these interpretable components.

4. Analysis of the Full Dataset

Using just that principal component, the regression on winning percentage for AFC teams provided an R2 of 72%. In Table 4 and Figure 3, we show how the principal components matched with the teams' number of wins. Again, we used the NFC as a "validation" group. The top five AFC teams, according to this criterion, made the playoffs. Five of the top six NFC teams made the playoffs.

Table 4. Team Rankings Based on the First Principal Component from Table 3 for All Teams in the NFL. Asterisks (*) Denote Teams that Made the NFL 2000 Playoffs. 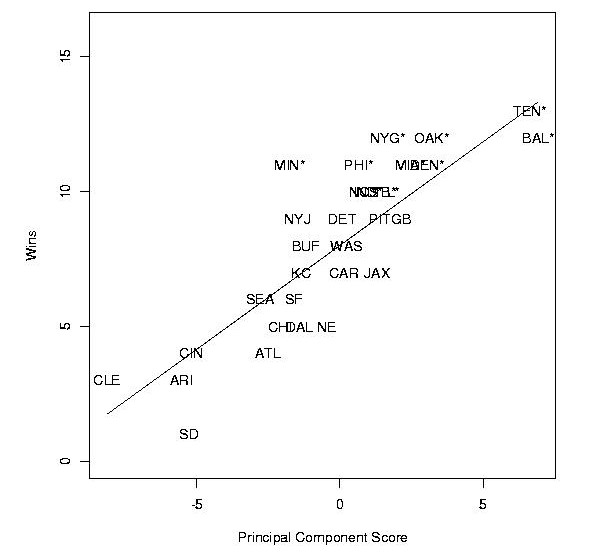 The first principal component, given in Table 5 for the entire dataset (including all of the variables and all of the teams) explained only 21% of the variation. Again, as in Table 3, it appears to compare the team to its opponents directly.

The R2 for the regression of this principal component on the number of wins, as represented in Figure 4, was 73%. Here, the top five AFC teams and five of the top six NFC teams made the playoffs. Furthermore, the principal component correctly selected the Super Bowl opponents and outcome, as well as all of the AFC playoff outcomes. (Its performance with respect to the NFC playoff match-ups was only successful half the time -- the New York Giants' victories over the Philadelphia Eagles and the Minnesota Vikings and the New Orleans Saints' victory over the St. Louis Rams.) 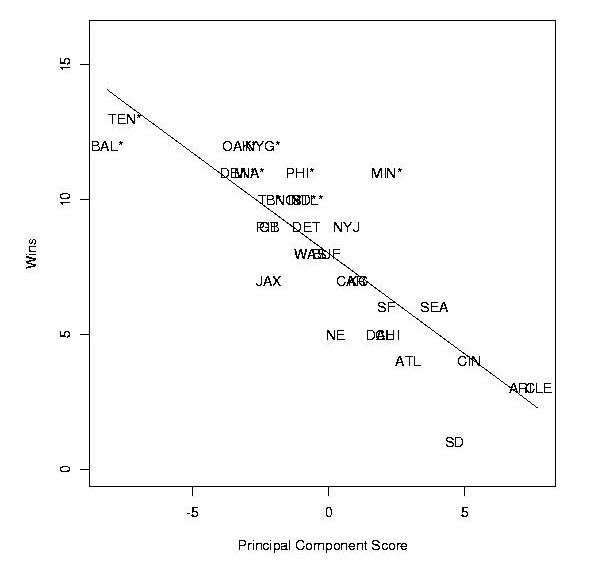 The "total score" in Table 10 is computed as the offensive score (column 6 of the table and Figure 5a) minus the defensive score (column 7 and Figure 5b) plus one-half the punting score (column 8 and Figure 5c). These weights were suggested from the regression of win percentage on all of these three scores. This regression had an R2 of 81%. Not surprisingly, the R2 for the regression of this "total score" (see Figure 5d) on the number of wins was also 81%. Here, the top six NFC teams and the top five AFC teams made the playoffs. Interestingly, the Raiders and Jets punt teams push them up in the rankings. The Vikings, who have the best punting special team according to this analysis, also fair better. On the other hand, the Redskins are hurt by their punting team.

Table 10. Team rankings based on a summary of the offensive, defensive, and punting special teams play of each NFL team. The offensive and defensive principal components come from Tables 7 and 8. The punting summary measure consists of the difference of the second and third principal components from Table 9. The total score upon which the ranking is based consists of the offensive score minus the defensive score minus one-half the punting special teams score. Asterisks (*) denote teams that made the NFL 2000 playoffs. 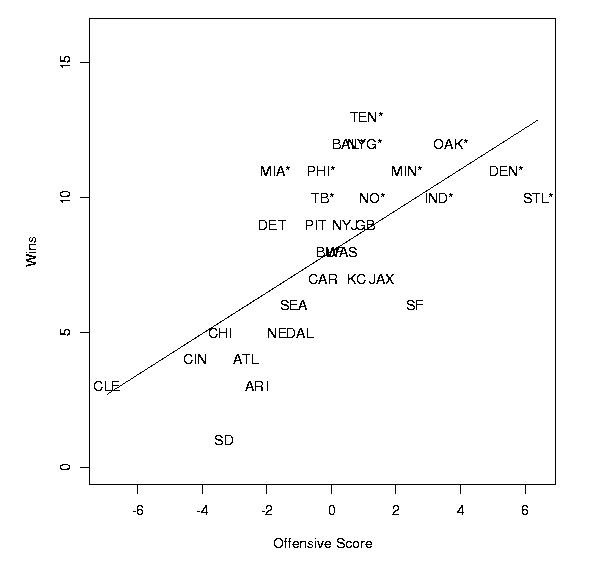 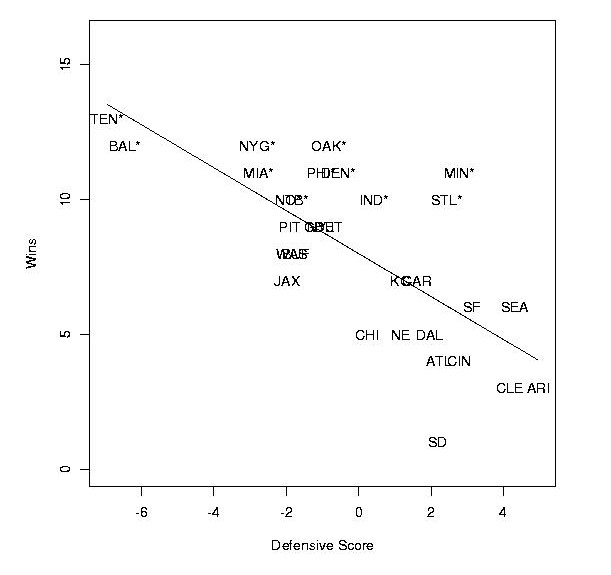 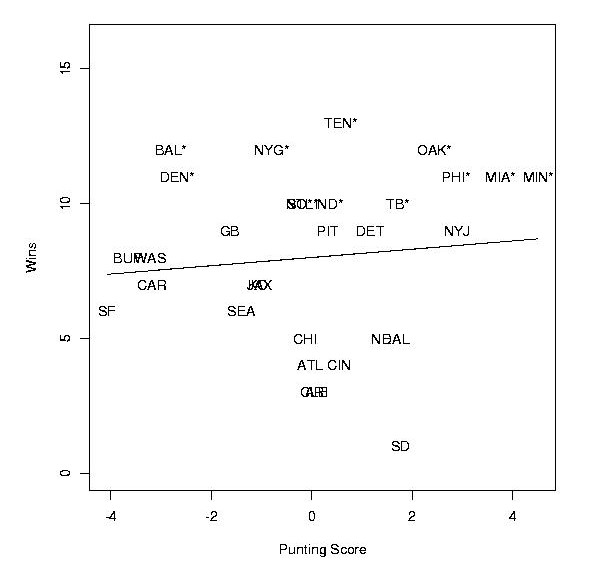 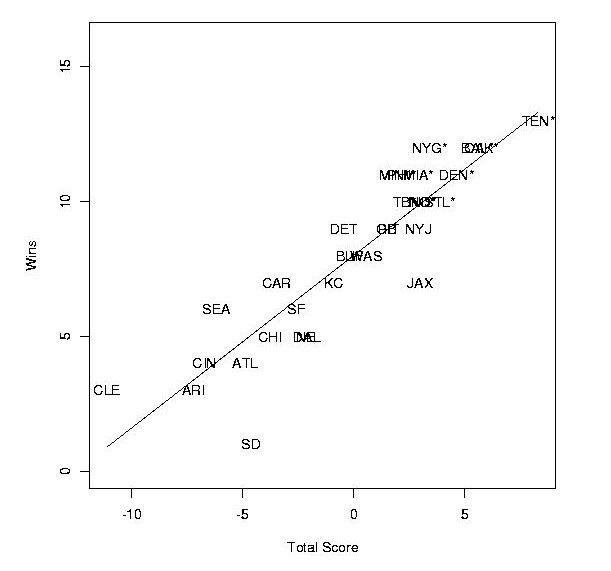 This dataset need not be limited to use in multivariate statistics courses. For example, one could discuss whether teams in the NFC score more touchdowns than teams in the AFC (and whether it is appropriate to use a two-sample t-test for these data). There are innumerable regression models that could be explored as well, but, as part of that, an interesting discussion could result from pointing out that the assumption of independence of observations is not met in this situation. Many students will recognize that the problem is not with, say homeint and oppint, being related (though there is collinearity), but with the number of wins across the teams that violates the assumption.

We have provided a reasonably comprehensive dataset for the 2000 NFL regular season. Furthermore, we presented and summarized some of our exploratory analyses on it. We believe that the dataset would be in a good example for use in multivariate statistics courses.

Appendix - Key To Variables in nfl2000.dat.txt

Also included in this data set, but not used in the corresponding paper are longest kickoff return (kolong), number of points (points), rate of first downs (1rate), and turnover rate (torate = number of interceptions plus number of fumble recoveries, divided by time of possession).

The authors wish to acknowledge the assistance of our colleagues, Robert Shumway and Alan Fenech, for their helpful comments on a primitive version of this paper. We also thank the Department Editor, Roger Johnson, and two anonymous referees for their suggestions, particularly with respect to the graphs they recommended.