Evaluating Aptness of a Regression Model

Copyright © 2007 by Jack E. Matson and Brian R. Huguenard all rights reserved. This text may be freely shared among individuals, but it may not be republished in any medium without express written consent from the author and advance notification of the editor.

The data for 104 software projects is used to develop a linear regression model that uses function points (a measure of software project size) to predict development effort. The data set is particularly interesting in that it violates several of the assumptions required of a linear model; but when the data are transformed, the data set satisfies those assumptions. In addition to graphical techniques for evaluating model aptness, specific tests for normality of the error terms and for slope are demonstrated. The data set makes for an excellent case problem for demonstrating the development and evaluation of a linear regression model.

Function points are a standard metric used for estimating the size of software development projects (International Function Point Users Group, 2005). Function point analysis is a structured method of estimating the size and complexity of a software system. This estimation process is based on the breaking down of a system into smaller components called function points, which measure different types of business functionality delivered by the system to the end user. Function points provide a means of measuring the system functionality perceived by the end user, and are independent of the technology (computer language, operating system, etc.) used to implement the system. Once a count of the function points for a proposed system has been developed, the count can be compared to historical function point counts for completed systems. Using the known development times of the completed systems, an estimate of the development effort required for the proposed system can be generated.

There are five basic types of function points: external inputs (data coming from the user or some other system), external outputs (reports or messages going out to the user or some other system), external inquiries (queries coming from outside the system which result in a report being sent to the requestor), internal logical files (data files that reside within the boundaries of the system), and external interface files (data files that reside outside the boundaries of the system). Standardized criteria have been developed to allow the consistent identification and categorization of function points from the design specifications of a proposed system, or from the actual features of an existing system (International Function Point Users Group, 2005). Once an initial count of function points has been generated, it is adjusted to allow for the overall complexity of the system, using a standardized system of weights that account for 14 different system factors (for a more detailed account of the adjustment process, see Function Point Counting Practices Manual, 2001). The final adjusted function point measure (FP) is then complete, and serves as an objective measure of the system’s size and complexity.

The data used in this paper are from 104 software projects completed at AT&T from 1986 through 1991. For each project five values are recorded: the adjusted function point count, the actual work hours devoted to completing the project, the operating system used, the database management system used, and the programming language used. The adjusted function point count is the only predictor variable discussed in detail in this paper. One unique aspect of this data set is the fact that the projects represent a total of 7,981 man-months or 665 man-years of effort. This is a very large set of software projects. The project data represent both new project development and project enhancements, and the data are not ordered by time or any other variable. Figures 1 and 2 show the distribution of function points and work hours. 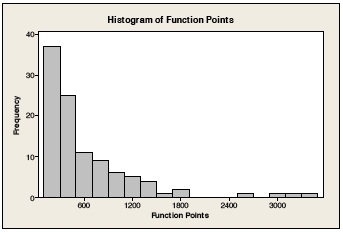 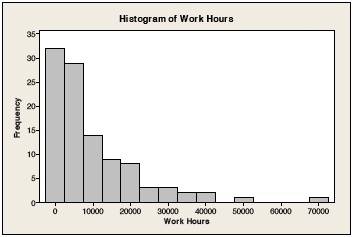 This paper presents a methodology for the development of a linear regression model for estimating software development effort using historical function point data. In developing a useful regression model, a number of concerns must be addressed. The first is model adequacy, or explanatory power of the independent variable in accounting for the variability of the dependent variable. This is typically measured by the coefficient of determination, R2. A large value of R2 is a good indication of how well the model fits the data. However, it is not the only measure of a good model when the model is to be used to make inferences. Linear regression models are tied to certain assumptions about the distribution of the error terms. If these are seriously violated, then the model is not useful for making inferences. Therefore, it is important to consider the aptness of the model for the data before further analysis based on that model is undertaken. Model aptness refers to the conformity of the behavior of the residuals to the underlying assumptions for the error values in the model. When a regression model is built from a set of data, it must be shown that the model meets the statistical assumptions of a linear model in order to conduct inference. Residual analysis is an effective means of examining the assumptions. This method is used to check the following statistical assumptions for a simple linear regression model:

Residual analysis uses some simple graphic methods for studying the aptness of a model, as well as some formal statistical tests for doing so. In addition, when a model does not satisfy these assumptions, certain transformations of the data might be done so that these assumptions are reasonably satisfied for the transformed model.

The following procedure was used to develop and evaluate the regression model:

where Eest is the estimated development hours and FP is the size in function points. The coefficient of determination (R2) for this model is 0.655. The Minitab results for the simple linear regression model are shown in Table 1. 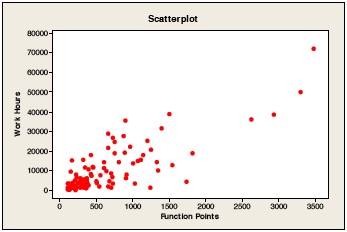 To determine the adequacy of the model, residual analysis should be performed. Figure 4 shows the plot of residuals against the independent variable (function points). 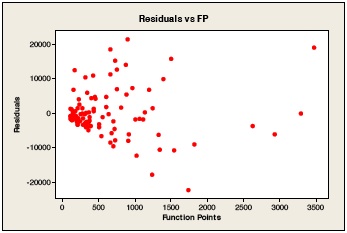 A normal probability plot of the residuals can be used to test the normality of the error terms. The normal probability plot in Figure 5 is not linear, an indication that this assumption is also being violated. A Kolmogorov-Smirnov (K-S) test for normality resulted in a p-value less than .010, a second indication that the error terms are not normally distributed. 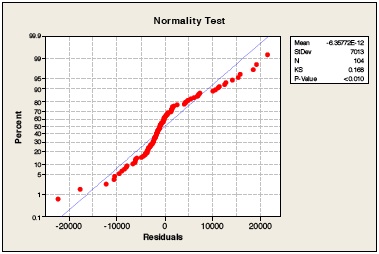 Figure 5: Normal Probability Plot of Residuals When Fitting by a Line

Based on the results of the residual analysis, if inference about development effort is to be conducted, then fitting function points by simple linear regression model is inappropriate. The model violates the constant error variance and normality assumptions.

The regression model built from the transformed project data is as follows: 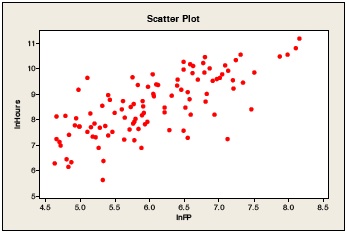 The next step is to check the equal variance and normality assumptions. A scatter plot of the residuals against the independent variable (natural logarithm of function points) is shown in Figure 7. No pattern in the residual data is apparent. The logarithmic transformation resolved the problem with increasing variance of error terms that existed with the project data in its original form. 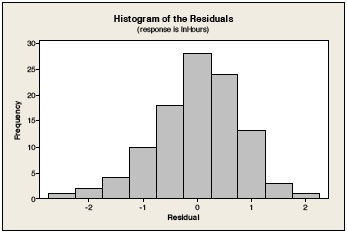 Figure 9: Normal Probability Plot of Residuals When Fitting by a Line

Therefore, Model 2 apparently satisfies the assumptions of equal variance and normality. Thus, Model 2 is appropriate for the transformed project data.

The regression model (Model 2) derived from the logarithmic transformed data satisfies the assumptions of a linear model and is an appropriate simple linear regression model of the transformed project data. However, some problems exist in this software project data that make statistical models difficult to use. Software data variance tends to increase with increasing project size, and the data typically have a relatively large number of outliers. The project data in this study reflected these characteristics, although the effect of the outliers was lessened by the logarithmic transformation on the project data. The point estimate produced by the cost estimation model is misleading without some measure of the variability that exists in the sample of projects. Specifying an upper and lower bound for the estimate in the form of a prediction interval provides this needed measure of variability.

The coefficient of determination for this model was 0.534, which means that almost half of the variability cannot be explained by the model. Basing an estimate solely on the results of this model would be extremely risky. However, the model is not without significance and usefulness because it leads to a measure of the uncertainty that exists in the point estimate. The primary cost estimate should always be based on a detailed analysis of the work to be performed. The model developed in this study could be used to provide further support of the detailed cost estimate and provide a measure of uncertainty for the effort estimate.

Prediction intervals for Model 2 (Appendix B) are apparently narrower for small projects and get wider as software size in function points increases. For example, the smallest project in the sample of project data is 119 function points. The point estimate of development effort for this project is 11.4 man-months. Considering that the corresponding 90% prediction interval is 2.91 man-months to 44.98 man-months the practical application of this model becomes questionable.

The data has been used in a sophomore-level engineering statistics class to demonstrate the development of linear regression models. The first assignment used the data to develop a simple linear regression model that could be used to predict development effort using function points. The assignment requires that students plot the data to see if a linear model seems appropriate. The students are then required to determine the regression model, to explain the meaning of the coefficient of determination, and to use an appropriate statistical test for a non-zero slope. The students are asked to perform residual analysis to verify that the assumptions of a linear model are satisfied. They must describe each assumption and explain the results of their analysis. When they discover that some of the assumptions have been violated, they are asked to try a transformation of the data. The text ( Devore, 1995) for the class had a table of useful transformations. 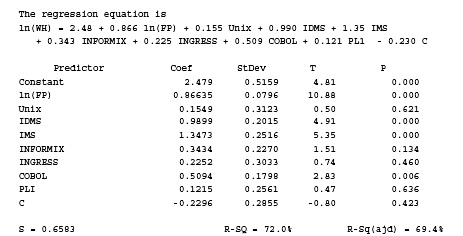 Regression analysis was used to determine the relationship between actual software development effort and software size in function points. An initial linear regression model was built, and upon further investigation was found to violate the constant error variance and normality assumptions of a linear model. Techniques for discovering these violations were demonstrated, along with one possible method of rectifying the violations: using a logarithmic transformation of the data. After transforming the data a second regression model was developed and was shown to satisfy the previously violated assumptions. We concluded with the use of prediction intervals to demonstrate the practical limitations of the final model.

The data discussed in this article are contained in the .dat.txt file aptness.dat.txt. The file aptness.txt contains a description of the data and, in particular, a listing of the different variables.

The authors wish to acknowledge Linda Hughes and Mary Dale of AT&T for their assistance in providing the function point data set. 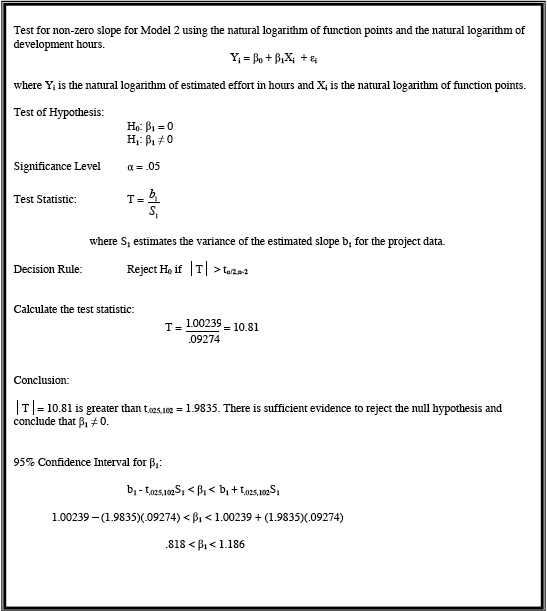 Appendix A: Test for Non-Zero Slope 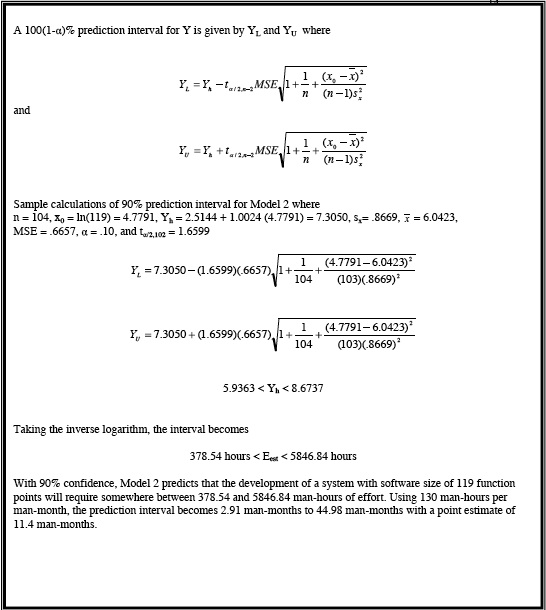