The Pedagogy and Probability of the Dice Game HOG

Copyright © 2003 by Larry Feldman and Fred Morgan, all rights reserved. This text may be freely shared among individuals, but it may not be republished in any medium without express written consent from the authors and advance notification of the editor.

The dice game HOG has been used successfully in a variety of educational situations as an activity that not only introduces students to concepts in probability, statistics, and simulation but also fosters student interest in these concepts. This article presents several areas in the statistics curriculum where important concepts can be dealt with in a hands-on way. These areas include probability as decision making, experimental versus theoretical probability, expected value, and optimization.

This article explains the rules for HOG, gives examples of students’ understanding, develops the probability theory, and identifies a “best” strategy for playing the game. This “best” strategy is developed in the context of fair six-sided dice and then generalized to fair s-sided dice.

The dice game HOG was developed by the Mathematical Sciences Education Board (1994) and is described in Bohan and Schultz (1996). The game has been played with a wide variety of audiences including graduate students in mathematics, Masters of Business Administration (MBA) students, students in undergraduate introductory statistics courses, and elementary and secondary school students. The authors have also played HOG numerous times in Statistics Education through Quantitative Literacy (SEQuaL) workshops for K-12 teachers at sites throughout Pennsylvania. The rules for the game are as follows:

Table 1 displays a sample of the first four turns in a hypothetical two-person game.

Table 1. Sample of the first 4 turns for a two-person game.

We have found that the dice game HOG provides an activity with accompanying assessments that reflect accepted standards and recommendations in the mathematics education community, such as those described in Mathematical Sciences Education Board (1994).

There exists an obvious trade-off in deciding how many dice to roll. The more dice the player rolls, the less the likelihood of a non-zero score. Yet if a one does not appear on any of the dice rolled, more dice will lead to a greater expected score. The number of dice a player chooses to roll may also depend on how far the player is behind or ahead in the cumulative score, or how close the player and any opponents are to winning. These and other factors provide an interesting activity for students with respect to decision making in the face of uncertainty.

Too often in statistics classes students are provided with results of experiments with little motivation. When playing the game HOG students are excited to try out different strategies. After allowing the students time to play against one another using fair six-sided dice, many students are curious to see if a best strategy exists. To this end, we suggest that each student or small group of students be assigned a fixed number of dice to be rolled. For example, one group must always roll exactly one die while the next group must always roll exactly two dice and so on. A fixed number of turns is assigned to the groups (ten turns works well if using actual dice and we recommend about thirty turns if the dice rolls are being simulated using technology).

After playing the game with fixed numbers of dice and comparing the results, students get the feeling that perhaps somewhere around six dice is the optimum number of dice to roll. However, they see that on any single turn different numbers of dice may produce the best score. This helps students to see that the results of experiments may vary and has motivated our students to investigate the “real” (theoretical) answer, which, as will be shown, is to roll either five or six dice.

For example, one of the authors had his “Probability and Statistics for Elementary and Middle School Teachers” students play the game. After they played the game to cumulative scores of 100 in groups of three to four students, each group was asked to list their top three guesses for the best number of dice to use. The results are given in Table 2.

Table 2. Students’ guesses for the best number of dice after playing once.

For the most part, the students did not believe numbers above four would be the best, probably since they tended to exaggerate the effect of getting a zero for any single turn.

The groups were then assigned a fixed number of dice to roll ten times with the goal of finding a mean score per roll. Their findings are in Table 3.

Table 4. Students’ guesses for the best number of dice after finding mean scores.

Sometimes the concept of expected value is presented as a formula that students do not intuitively understand. For many students a visual approach to expected value can be very meaningful. The possible outcomes and the expected score after rolling just one die are displayed in Table 5.

The expected value for rolling one die can be computed by evaluating If you roll one die ten times, your expected score will be approximately 33. Since the mean of the non-zero values (2, 3, 4, 5, and 6) is 4.0, the concept of conditional expectation can be introduced by calculating the expected value for one die as

Table 6 shows that when rolling two dice the expected value is 200/36 or approximately 5.6, since the sum of all 36 of the possible outcomes is 200 and each outcome is equally likely.

The proportion of non-zero area in this table can be represented by 5/6 of the possible outcomes for Die 1 times 5/6 of the possible outcomes for Die 2, or 25/36. The mean of the non-zero values will be four times the number of dice for two dice). Using conditional expectation, the expected value is determined by For the general case, there will be five non-zero values out of six for each die used, so the probability of scoring positive points with a roll is where n denotes the number of dice rolled. Given that zero 1's are rolled, the expected score is 4n, since 4 is the mean of the non-zero scores 2, 3, 4, 5, and 6. The expected score is then the product of the probability of a positive score with the conditional expectation given a positive score, namely These values for rolling 1 through 12 dice are displayed in Table 7.

The graph of the expected score function for rolling up to 40 fair six-sided dice is shown in Figure 1.

Figure 1. Expected scores for rolling from 1 to 40 fair six-sided dice.

These results demonstrate that an optimal strategy is to use either five or six dice for each roll. Of course, a player still might want to change the number of dice to roll if the player is far behind or far ahead in the cumulative score.

(where Xi = the number of dots on the top face of the ith die), and

The expected score per turn is given by

Since k must be an integer, more analysis is required to determine which integer on either side of Equation (2) achieves the maximum. 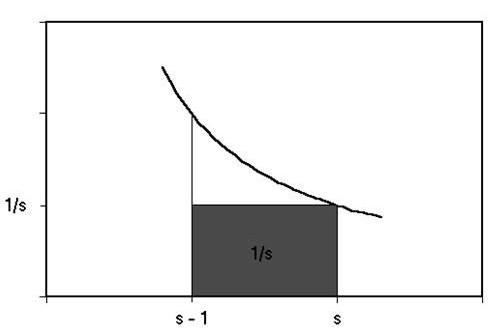 Using the first derivative test for test values s-1 and s, it is easy to show that the value for k in Equation (2) above maximizes the expected score. This number k is between s-1 and s, which are consecutive integers. Therefore, substituting and into Equation (1), we find:

As a different extension, it can be shown that the variance of a player's score per turn is:

The dice game HOG can be played and analyzed by elementary school children up through graduate statistics students. This activity is typical of the kinds of activities that teachers and their students seem to enjoy the most. It is a fun activity that has “hidden” deep probabilistic, statistical, and mathematical concepts. These embedded concepts can be adapted for students at a wide variety of levels.